Some things are important to note about NAFLD: 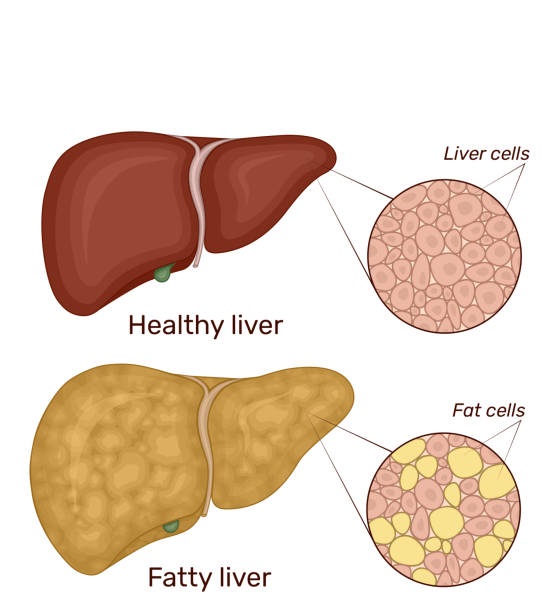 “Non-alcoholic fatty liver” is both the name of a disease and a description of a variety of liver conditions ranging from fatty liver* to the more -serious non-alcoholic steatohepatitis (NASH), cirrhosis and liver failure.

A fatty liver has too much fat in its cells. When fat makes up at least 10 percent of the liver it is called a “fatty liver.” (See Figure 1.) Just as with the rest of the body, fat in the liver can cause it to become bigger.

This condition (and the range of conditions) are referred to as “non-alcoholic” to highlight the difference between NAFL and alcohol-related conditions. However, it is important to note that changes in the liver with non-alcoholic fatty liver are almost the same as those that result from drinking too much alcohol. NAFL requires attention to avoid additional, more-serious problems in the future.

If you have questions after reading this information, talk to your health care provider.

* References to “fatty liver” refer to the condition of having fat in the liver. In this material, it does not refer to the range of liver conditions.

What is the liver and what does it do?

To understand alcohol-induced liver disease, it may help to know how a normal liver works.

At a weight of about 3 pounds, the liver is the largest solid organ in the body. (See Figure 1.) Everything you eat, drink, breathe, and absorb through your skin eventually reaches your liver. To be healthy, you need a healthy liver.

Good liver function is needed to:

You may know that the liver has the ability to rebuild itself (regenerate its cells) if part of it becomes damaged.
However, with NAFL, the progression of liver damage could go beyond the point when the liver is able to repair itself.

How is liver disease diagnosed?

As the name implies, this condition is related to being greatly overweight (obese). Up to 75 percent of men, women and children who are obese may have fatty liver and be at risk for NAFL.

The best way to learn whether you are overweight or obese is to use a guide called the body mass index (BMI). This guide considers your weight in relation to your height. If you are unsure whether you have a weight problem or want to learn if you would be considered “overweight” or “obese,” talk to your health care provider.

A person’s race (ethnicity) may help determine when their weight impacts the accumulation of fat in his or her liver. People of some nationalities tend to be diagnosed with fatty liver at a lower BMI than other people.

People who tend to deposit fat in the belly (abdomen) instead of the hips are more likely to have fatty liver. Your health care provider may measure your waist and hips to determine whether you have this tendency.

Excess weight in hips and thighs the belly (abdomen)

What are the causes of Fatty Liver & Non-alcoholic Steatohepatitis (NASH) ?

Eating fatty foods does not directly cause fatty liver. The specific causes of these conditions are unknown. However, it is believed that the events that lead to liver problems happen in a particular order:

Extra fat may come from other parts of the body and deposit in the liver, or the fat may be caused or affected by other conditions, including alcohol, other liver diseases and certain medications.

Progression to NASH and Cirrhosis

Although fatty liver itself is not always associated with inflammation or scarring of the liver, occasionally it may progress to more serious liver disease(s). If you have fatty liver and abuse alcohol or have other conditions that affect your liver, the damage to your liver could lead to a more serious condition.

The specific reason fatty liver progresses to NASH is unknown. Having too much fat in the liver may make the liver more vulnerable to inflammation and damage.

In some people, NASH progresses to excessive scarring in the liver (cirrhosis). It isn’t known why some people are at high risk for this. Risk factors likely include diabetes and obesity.

Eventually the scarring can limit the ability of the liver to do its jobs and lead to liver-related symptoms. Continued damage to the liver could lead to liver failure. Both cirrhosis and liver failure (also known as “end-stage liver disease”) are life -threatening conditions. Immediate medical attention is needed. People with cirrhosis also are at increased risk of developing liver cancer.

What are the symptoms of NAFLD ?

Most people with fatty liver have no symptoms. Typical symptoms may include feeling tired (fatigued) and having abdominal discomfort on the right side. This is caused by pressure within the liver.

Cirrhosis offers no symptoms early on. As the disease progresses, the following symptoms may be diagnosed:

How is NAFLD Diagnosed ?

There is no one, specific test to diagnose fatty liver. The diagnosis is made by ruling out other causes of liver disease, such as excessive use of alcohol and viral hepatitis.

Fatty liver may be suspected in someone who has diabetes and/or is obese. Because most people have no symptoms with fatty liver, it may be found during routine tests. Tests that may be done to help diagnose fatty liver include:

(aspartate aminotransferase) may be high in people with fatty liver.

CT scan is a type of X-ray that takes cross-sectional pictures of the body and its organs. An MRI is a body scan that uses magnetic fields and radio waves (instead of X-rays) to piece together images of internal body parts. It shows a contrast between different types of soft tissue.

What is the treatment for NAFLD ?

Weight loss and physical activity are the only treatments for fatty liver. Medications for NASH are being studied, but none has been found to be effective. Talk to your health care provider about how to minimize some symptoms, if possible.

Your health care provider may suggest the following to help you feel better and possibly to help improve long-term survival:

People with fatty liver who are overweight may benefit from a gradual weight loss. Weight loss and increased physical activity may result in reduced fat and inflammation in the liver and may prevent the condition from progressing to more serious liver disease.

A healthy diet consists of fresh fruits and vegetables; whole grains; lean meats, poultry and fish; and low-fat dairy products. Generally, it is best to follow an eating plan that is high in fiber and low in fat and sugar. Talk with your health care provider about your diet and whether you need to lose weight. You may want to consult a dietitian, as well.

People who are active tend to lose more weight and do better at keeping if off than people who are not active.

Check with your health care provider before starting an exercise program.

Non-alcoholic fatty liver disease is a condition that may improve with healthy lifestyle changes. NASH, cirrhosis and end-stage liver failure require medical care to help relieve the symptoms. It is important to have regular follow-up appointments with your health care provider to monitor these conditions.

If you have questions after reading this information, talk to your health care provider.